Jean Siegfried, a founding member of Neighbors Network, served as host and tour guide for Ceceile Kay Richter, a member of two Villages in the Washington, D.C. area. Ceceile explained:

“I am a very active 73-year old woman who is still working and it was with some hesitation that I joined a senior village at all, but it was one of the best things I have ever done for myself.  My horizons and social life have expanded considerably since joining the Dupont Circle Village in January 2012 and the Foggy Bottom-West End Village in January 2014.”

Ceceile was headed to the Orlando area for a wedding and found Neighbors Network by going to the Village to Village Network; its website is .

“We had just finished with the Winter Park Lakes boat tour, and were checking out the stores along Park Ave., thus our big hats and sunburned faces!  The black bags are ‘Foggy Bottom West End Village’ souvenirs from Ceceile.” 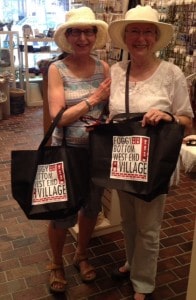